HomeBlogUncategorizedHow Many Unloading Methods Are There In The Hydraulic System?
Posted on in
Uncategorized

How Many Unloading Methods Are There In The Hydraulic System?

What is hydraulic pump unloading?

Unloading means the pressure becomes zero and the oil returns to the tank. Generally speaking, it is the working state of the hydraulic system without load. That is, the pressure oil output by the hydraulic pump is directly returned to the oil tank.

Because in the hydraulic system, as long as the motor (or other prime mover) rotates, the oil pump will release oil, but the load does not move and does not need pressure oil, so the oil from the oil pump has nowhere to go, and can only return through the relief valve to the fuel tank. In this case, the heat generation is very large, and the continuous high pressure damages the oil pump and hydraulic valve. At this time, the hydraulic oil must be released back to the tank without pressure. This action is called unloading.

Therefore, the unloading state of the hydraulic system refers to the state in which the hydraulic pump continues to operate, the actuator does not act, and the relief valve has no high-pressure relief.

In the unloaded state, the actuator does not do external work, so we hope that in this state, the power consumed by the motor or the internal combustion engine that drives the hydraulic pump to run is as small as possible.

1. In a single-actuator system or a system equipped with a multi-way valve, we can use the center machine of the reversing valve to directly unload the load.
2. Use electromagnetic relief valve to unload;
3. The electromagnetic reversing valve is used for unloading;
4. Use constant pressure variable pump to unload;
5. The unloading valve is used for unloading;
We only talk about the latter four today.

Features: This method uses an electromagnetic relief valve for unloading, which has a large flow range and is currently the most widely used unloading method.

Power loss calculation: Under normal circumstances, the unloading pressure of the relief valve at the rated flow rate is about 0.5MPa. We assume that the system flow rate is 200L/min, then the power loss caused by unloading can be calculated as follows: P loss = ( p*Q)/60=(0.5×200)/60=1.67(kW)

Summary: If the flow of the entire system is relatively large, the power loss of this part should not be underestimated. 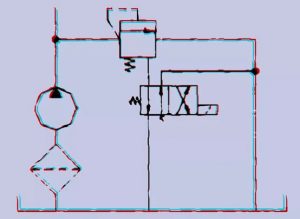 Unloading principle: use the electromagnetic reversing valve to open the bypass to unload directly.

Features: The power loss of unloading is determined by the pressure loss of the selected electromagnetic directional valve.

Calculation of power loss: When the solenoid valve is used to open the bypass and directly unload the load, the solenoid valve selected is generally a 6-diameter valve. Although a valve with a diameter of 10 or more is used, there is no problem in principle, but it is not economical. Therefore, This determines that this unloading method can only be used in occasions with small flow.

Unloading principle: In the system of constant pressure variable pump, when the set pressure of the pump is reached, the displacement of the pump will be close to zero, which can avoid overflow loss and greatly reduce the heating of the system.

Features: During the unloading process of the constant pressure variable pump, because the pump is always in a high pressure state, there is leakage and energy loss caused by mechanical friction.

Calculation of power loss: According to the sample of Rexroth A10V pump, when the system pressure is 20MPa, the volumetric efficiency is about 95%. We still assume that the flow rate of the system is 200L/min, then the total energy loss is P loss = p*Q/60 *(1-0.95)=(20×200)/60×0.05=3.33(kW)
At this time, the energy loss is also quite large, which is almost twice that of the electromagnetic relief valve unloading method.

Summary: In a high-pressure and high-temperature system, this unloading method should be used with special care.

Summary: This unloading method is the most energy-efficient, but at the same time its structure is the most complicated.

What Are the Types of Torque Wrench?

There are many types of torque wrenches on the market, which are mainly divided into four categories, [...]
Read more
Uncategorized

The Chinese Lunar New Year in 2023 is coming, and all the staff of TorcStark wishes everyone a happy [...]
Read more
Uncategorized

How to Tighten A Bolt?

How to tighten a bolt? This problem looks like “how to put an elephant in the [...]
Read more
Uncategorized

Types and Features of Hydraulic Cylinders